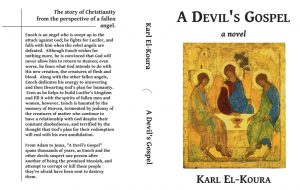 On March 17, I shared the cover I did for the draft of A Devil’s Gospel. The cover image is of Rublev’s trinity icon, which I felt perfectly encapsulated one of the themes of my novel. The “surface” depiction is of the story told in Genesis 18: Abraham is sitting in the door of his tent when the Lord appears to him. Abraham looks up and sees three men; he runs to them and bows in front of them. Then Abraham addresses one of them as “My Lord” and invites them to stay and rest. It turns out that one of the men is indeed the Lord (and He tells Sarah, who is very old and barren, that they’ll have a son) and the other two are angels.

For Christians, it’s clear that the man who is called Lord (Yahweh) in this passage is the pre-incarnate Christ. And very quickly, Christians saw this story of Abraham and Sarah extending hospitality to the three heavenly beings as a foreshadowing of the revelation that God is triune.

Rublev’s icon is a masterpiece for many reasons (how brilliant of him that the faces of each figure is exactly the same, for example), but exploring or contemplating the beautiful icon is beyond the scope of this post.

For my purposes, I loved how well it encapsulated the idea of Christ’s shadow (which I posted about on March 10): this strange story of three men, one of whom is the Lord, suddenly gaining deeper levels of significance in the light of Christ’s incarnation and His revelation of the triune nature of the Godhead.

So why didn’t I use it for the final cover? There were two reasons. One (and based on advice from my wife), I wanted something more accessible to a wider audience; I think Rublev’s icon, beautiful as it is, might be intimating or off-putting to the reader who wants to pick up a fast-paced thriller that happens to retell the story of Christianity. Two, something that Father Thomas Hopko said in a recorded lecture has stuck with me ever since I heard it. Father Tom, who used to be Dean of St. Vladimir’s Orthodox Theological Seminary, said that he’d tried very hard to get St. Vladimir’s Press to stop using icons on the covers of their books. He wasn’t successful, and I believe I understand the reasons why (for the right book, using an icon as the cover image is irresistible—and of course, Orthodox churches use icons as the covers of their bulletins). But his argument sticks with me—icons are holy objects of veneration; they shouldn’t be printed on paper that might end up in the trash, or trampled on, or in a stack under a bunch of other books.

I haven’t always followed his advice (the covers for the Father John books, for example, use details of an icon called the Ladder of Divine Ascent), but the force of his argument is enough to make me pause and be sure there isn’t a better alternative. In this case, I felt there was.

Father John VS the Zombies, my forthcoming novel about the zombie apocalypse from a Christian perspective, has its own page on Facebook! […] 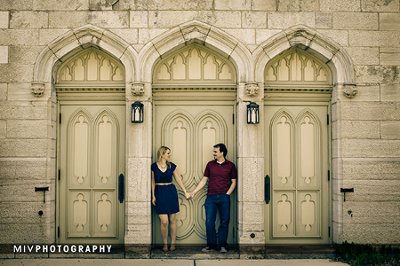 In twelve weeks, Kirsten and I will be married in an Orthodox church. Since many of our guests are either not Orthodox […]

A few days ago, I shared my opinions on an offer to “co-publish” my manuscript that I received from Charisma Media. I […]

In my city, a mini-controversy has recently erupted over an advertisement that an atheist group would like posted in city buses. The […]