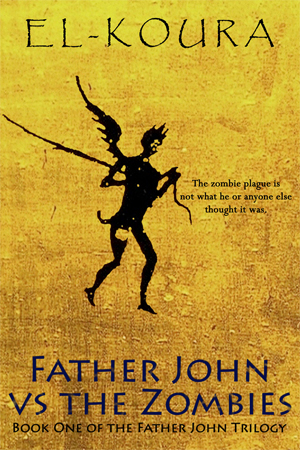 Now—howling, angry, bloodied creatures claw to get into Johnny Salibi’s house, where he lives with his wife and young daughter.

But Johnny and his family are safe. He’s boarded up the windows. The door is locked and secure. They will ride things out until the government can get things under control again. They’re safe. . .

Combining elements of zombie fiction, apocalyptic literature, and spiritual thrillers, this is the gripping tale of a man whose faith in God is put to the test with life and death—and even greater—consequences. 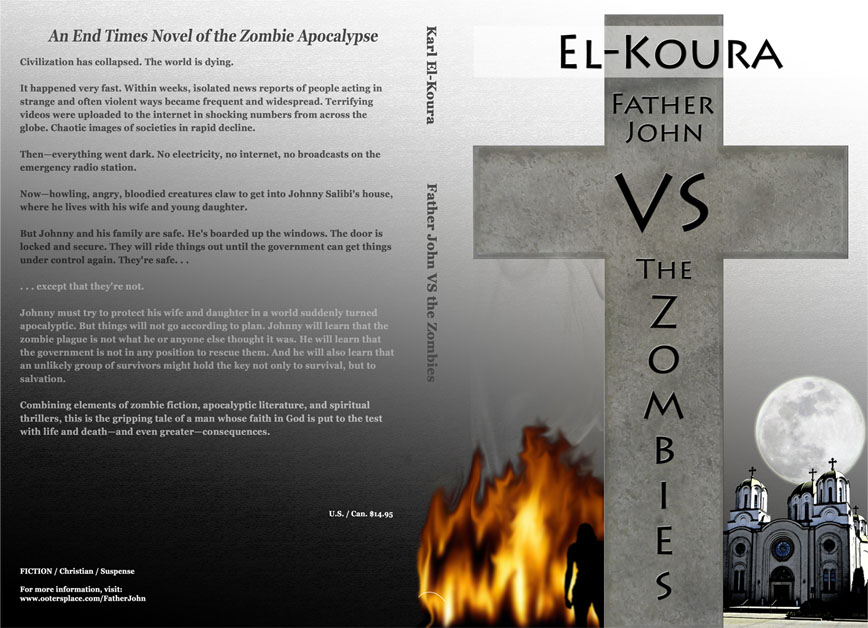 A Short Interview with the Author

What is Father John VS the Zombies?

It’s a novel about the zombie apocalypse, but with a twist.  I asked myself, “If Christianity is true—if the Bible is true—what would it look like to have the world end in a zombie apocalypse?”  And I think the answer is pretty compelling. And very scary.

What inspired you to write this novel?

I love post-apocalyptic fiction, especially zombie fiction.  I love the idea that all of the distractions of life—from big things like renewing your mortgage to little things like ironing your shirts—none of that matters anymore.  It’s completely back to basics—just surviving, just finding food and water and shelter.  And trying to not get eaten by zombies!  And things like having your friend’s back, or banding together with strangers, to survive.

I also like the drama in zombie fiction: the tension, the pervading sense of doom, the idea that a zombie might be lurking around any corner.  But also the sense of hope, this small flickering light that maybe the zombie disease can be cured, maybe a small group of survivors can rebuild civilization.

But there are other things I don’t love about zombie fiction, especially gore for no other reason but to try and gross you out.  I don’t like the sense of despair and nihilism, too, as if all that’s left for these characters is to just die already or give in and become zombies themselves.  I also don’t like that there’s no real awareness of God in a lot of these stories—a character or two might pray or cross themselves, but faith is bolted onto the story usually, and it doesn’t make any real difference one way or the other.

So I wanted to write a zombie novel with all of the things I love about the genre, but to stretch it a little—to see what it would look like under the light of Christianity.  I wanted to baptize zombie fiction as a genre into Christianity. So faith is part of the DNA of this story, and it makes a huge difference to how things play out.

I think the result is pretty interesting.  And given how many novels and movies there are about slow-moving zombies who just want to eat your brains in the goriest way possible, I’m glad that my novel is a bit different.  It’s a “fresh” take on zombies, if I can put it way.

Is the book dark?

There are moments of joy and lightness in the book, but it’s set against the backdrop of the end of the world, so it does get pretty dark.  Some horrible things happen.  It’s a novel for adults, definitely not appropriate for children.  It’s a serious look at the end of the world. . .and it isn’t so much post-apocalyptic as apocalyptic because the apocalypse is happening all around the main character.  He’s trying to survive in this world where all of these zombies are trying to kill him, and he’s trying to make sure that his family survives too.  But he also believes in God and in God’s plan for the world and for humanity.  He believes that all things work together for the good of those who love God.  So despite how dark things get in the novel, there’s always a bright light of hope. 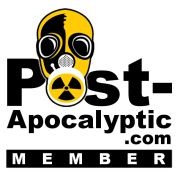