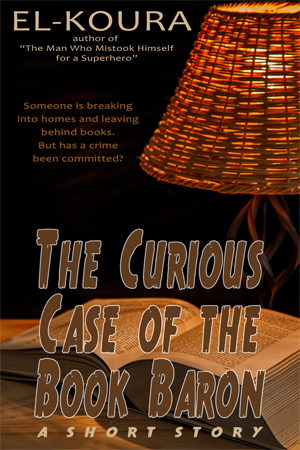 Detective Diego Montel is determined (obsessed, his partner would say) to catch the culprit behind a series of city-wide break-ins.

But Diego is facing several problems:

1. There’s no evidence of the break-ins actually taking place.
2. The culprit isn’t stealing anything. He (or she) is leaving things behind—books.
3. Diego’s boss wants him to stop wasting time and departmental resources on what might not be criminal activity at all.

None of that will deter him, though. And neither will Diego’s partner (whose beautiful brown eyes are more than a bit distracting), who thinks the whole thing is kind of funny.

Diego won’t stop until he unravels the strange mystery surrounding the criminal figure people are calling the Book Baron.

“The Curious Case of the Book Baron” is a short mystery story for people who love books and reading.

The ebook of “The Curious Case of the Book Baron” is currently available for purchase at Amazon.com

“The Curious Case of the Book Baron” was originally published in Issue 4, Volume 12 (Spring 2006) of Storyteller and is reprinted in the author’s collection Ooter’s Place and Other Stories of Fear, Faith, and Love.