And now the third and final part of Chapter 1 of A Devil’s Gospel. (Check out Monday’s and Wednesday’s posts for the first two parts).

One day Satan found me walking along the shores of the fiery lake.

“It doesn’t end,” I said. “I’ve shifted up and down the shore, every day going a little bit further before coming back. It just keeps going.”

“Many of them have mostly forgotten; the rest are forgetting more and more as time goes on. That’s good—if they remembered what they were like before…” He let the unfinished sentence hang in the air. “They’re better than when we first got here, don’t you think?”

“I guess so, yes,” I said, anxious for him to get to his point because I felt so uncomfortable speaking to Satan, especially alone.

“People trust you, Enoch. I need you to find out what they’re saying about me.”

Satan kneeled over the lake and stared into it, as if it were a mystery he wanted to solve.

“Some of them still remember the war,” I continued. “They say that we lost, despite your assertions to the contrary. You led us in an uprising against God—against the Enemy—and He is still in His High Country and we are in…this place.”

Satan turned his head to look at me, his eyes burning. “Do you think I lost the war, Enoch?”

For a moment, I thought of lying. But I knew that eventually word would get back to Satan; I’d been the most vocal person reminding anyone foolish enough to repeat Satan’s words that in fact we’d been defeated in a spectacular way, and that when the fearsome Lucifer-Dragon fell like a bolt of lightning, Michael was left standing. “Yes, we lost,” I said.

“Don’t look so scared, Enoch. Of course we lost—but that was only the first war.”

I spoke my next words carefully. “A war against the Enemy?”

He motioned for me to follow him back to the castle. “Enoch, I may be gone for a while. Some of our brothers may be tempted to do something foolish in my absence. You understand of course how that would be bad for all of us?”

“What do you want from me?”

Satan stopped in mid-shift and put a hand on my shoulder. “You’ve spent a lot of time talking about how I’ve lost the first war,” he said. “Now you will spend time explaining to our brothers that a new war is beginning.”

I tried not to look into Satan’s eyes. “God—the Enemy—will know you’re coming.”

“So much the better!” He stopped himself, then continued in a calmer voice, “But I’m not asking you to worry about the Enemy’s plans, am I? I’m asking you to share with your brothers your excitement about the opportunities this new war will provide for all of us. Can I count on you to do that, Enoch?”

No longer able to avoid his eyes, I saw in them a vision of myself bound and thrown into the lake of fire, yelling from pain and shame as the dark angels stood on the shore and cackled with mirth. “Yes, I can do that.”

I followed his shift to the throne room. Satan called for his angels to gather; I don’t think it was lost on him that they assembled more slowly than the last time he’d called them together, or that more of them were moaning with every step and that a few were even crawling again.

“Brethren,” he said, “I am not blind to your suffering or deaf to your cries. Am I doing nothing, as some of you say? Do I sit on my throne all day, while you are in misery? Lies! Attend to my words. For your sake, I am leaving the safety of this palace. I am going on a mission, to visit these new creatures the Enemy has created. I go for you, to bring you relief from pain and respite from boredom.”

With that, and without waiting for a response, he disappeared.

Some energy seemed to have flowed back into the assembly. The dark angels bombarded each other with questions and theories and suspicions. I was closed off to some of the conversations—as much as Satan believed that his angels trusted me, most of them also sensed that there was something different about me, which led to a certain degree of suspicion. I did my best with the conversations that were open to me, jumping in when the focus shifted to the first war and its failures, reminding my brothers that this was a new war and that it seemed to me Satan knew what he was doing. I have no idea how confident I sounded. The talk went on for a long time, but before any of the conversations had wound down, I became aware that Satan had reappeared, and was sitting on his throne, watching and listening.

He looked different; taller and fuller, but also darker than before. The little light that had still existed in him seemed to have been completely swallowed up. If he’d been fearsome before, he was terrifying now.

A few other dark angels became aware of his presence, then many more, then everyone and the silence was complete.

“Brethren,” he said, “some of you had faith in my mission, whereas others are still questioning my leadership. I thank those of you who trusted in me; as for the others, I ask only that you listen to my next words and tell me if there is room for doubt left in your minds. Today I have made the Enemy burn with fury.”

A moment of shock elapsed, and then we shouted, together as if we were a single, deafening voice, “What happened?”

A now-familiar smile spread across Satan’s face; a smile fueled not by humor or joy but by anger and lust; a smile whose only pleasure is the suffering of others.

“Brethren, I will be very pleased to tell you what happened.” He leaned forward and waited for us to draw closer. “It all starts with a man and a woman.”

That’s it, the first chapter of A Devil’s Gospel.

Tune in on Monday for a glimpse into who this novel is dedicated to!

Karl El-Koura was born in Dubai, United Arab Emirates and currently lives with his beautiful editor-wife in Canada’s capital city. More than sixty of his short stories and articles have been published in magazines since 1998, and in 2012 he independently published his debut novel Father John VS the Zombies. 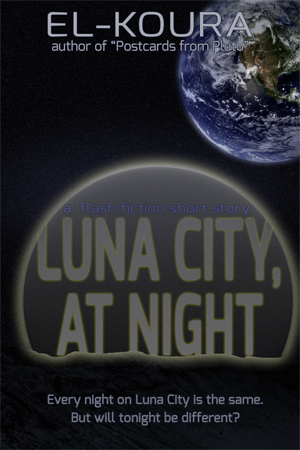 Every night he hits the bars and looks for a girl to take home. He knows how it will end, like every other night ends.

But will tonight be different?