I’m excited to reveal information about my forthcoming novel.  In almost 15 years of active publishing, I’ve published over 60 short stories in different magazines and anthologies, two collections of stories, some articles and blog posts, but never a novel-length work—until now.

It’s called Father John VS the Zombies and it’s the story of a man who finds himself in the middle of a zombie apocalypse—but I can safely say this isn’t like any other zombie story you’ve read before.

In the coming weeks and months, I’ll be releasing more details about the book, including revealing the cover art, providing the first chapter for free (in the hopes it sinks its fangs into you “—oh wait, that’s a different genre), and a few other things I have planned.  Below is a short description of the novel and a masked version of the cover art to whet your appetite.  Father John vs the Zombies is planned for publication in late 2012.

If you don’t want to miss out on any of the fun, sign up to the Announcements List and you’ll be among the first to know when the novel is released. 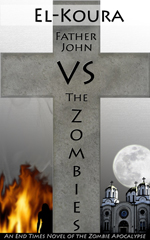 Civilization has collapsed. The world is dying.

Now—howling, angry, bloodied creatures claw to get into Johnny Salibi’s house, where he lives with his wife and infant daughter.

But Johnny and his family are safe. He’s boarded up the windows. The door is locked and secure. They will ride things out until the government can get things under control again. They’re safe. . .

Planned for publication in late 2012

Want to be among the first to know when Father John VS the Zombies is released?  Sign up to the Ooter’s Place Announcements List.

Combining elements of zombie fiction, apocalyptic literature, and spiritual thrillers, this is the gripping tale of a man whose faith in God is put to the test with life-and-death—and even greater—consequences.

My mystery short story “The Man Who Loved Pie” will appear in Issue 2 of Mystery Weekly Magazine on September 14. Subscribe for […]

A few months ago, when the union responsible for Ottawa’s local bus service decided they could inflict maximal harm on the city […]

The Lost Stories: A Series of Cosmic Adventures is now available for the Kindle on Amazon.com for only US$1.49.  It is also available […]