Without further ado, this week I’m sharing with you the first chapter of A Devil’s Gospel, starting with the first part in 3…2…1…

It all started with a man and a woman.

Did we think He-Who-Rules could do it, even after he’d failed so spectacularly? We all did, each of us for our own reasons: because we wanted the relief that his success brought, or because it was so much fun to torment them, or even because some of us came to really believe the lie he told us, that we could be victorious against Him after all.

Did the Enemy have this planned all along? That question tortures me above all else, tears me apart from one end of my being to the other, and is worse to me than anything He-Who-Rules can do. Did we ever have a chance? It’s a silly question, isn’t it? Some of the fallen ask this other silly question: can the Enemy create a stone so heavy that even He can’t lift it? Before the First War, He-Who-Rules asked us something similar, and at the time it didn’t seem silly but very serious.

We met in a hall I’d sung myself. I think that bit was on purpose, though I never thought of asking then or since, and now it’s too late.

Few of us remember those days, but I’ve never been able to forget. I’d been reshaping an old castle I’d built long ago, singing it into a more rounded style that I thought was different and would please my friends, when suddenly I became aware that I was being watched.

“I said Lucifer sent me,” Moloch interrupted, smiling, “not God.” He whispered a location in one of the lower dimensions, but it wasn’t until I shifted there that I realized we stood in one of my old songs.

“Welcome, brethren.” Lucifer shimmered the lightest blue, his glow more radiant than any angel I’d ever known, and yet duller than usual. To look at Lucifer was always an experience, but even then I noticed a difference—as if he stood behind a thin wall of smoke. The Transformation had already begun, I just didn’t know it yet.

His voice was as strong and commanding as ever, and it projected across the entire hall.

“I’ve called you together, brethren, to tell you a sad truth. We’ve been had, tricked by God Himself. We watched as He created a new dimensional space and like fools we cheered. We sang together and shouted for joy. We thought he was creating shiny stars and pretty planets. We didn’t realize what he was actually making.”

“Do you know what He was actually making, Enoch?”

I looked up, startled. The room was empty except for Lucifer and I; it was a trick he had and still has, to make you feel that he’s speaking to you alone in a room full of people.

His eyes, green and luminous, bored into me. In those eyes I’d always read judgment and criticism, or perhaps I equated how intimidated Lucifer made me feel to the inadequacy that always accompanied it.

“This is different. It’s a home for a new kind of creature, a creature also possessed of an intellect and will, but a creature not like us.”

“How do you know all of this?”

“I’ve been offered dominion over their home.”

“To rule over them?” I said, surprised.

Lucifer’s eyes flashed a deep, fiery red. “To help them,” he said, speaking slowly. “To guide them. In other words, to serve them.”

I took a step back. “I don’t know that we should be talking like this.”

“Is that what you want, Enoch? To spend eternity in servitude?”

“We were created to serve.”

“To serve God!” Lucifer’s voice seemed to have turned to flame, and his words burned as they washed over me. “To serve the Ancient of Days, not his new pets. Not these new creatures with two natures.”

I did, but kept the thought to myself.

Suddenly the room was full again, packed with the other angels I’d seen before, angels whose eyes were fixed on Lucifer.

“Can God create a creature so powerful that even He can’t stop him?”

I didn’t know what he meant, but presumably the others did because they cheered.

As he spoke, the angels cried out their support and excitement.

Again I felt that we were alone and that the distance between us had collapsed. Lucifer stood so close that I could feel the sense of disappointment radiating from him.

“Because you get to make trifles?” Lucifer must have sensed my annoyance, because the tone of his voice suddenly changed, from a condescending to an appeasing one. “I’ve never known a better builder, Enoch. But what are you really doing, after all? You’re taking pre-existing material and reshaping it, suggesting new forms and functions to things that already have a form and a function. Wouldn’t you like to truly create something? To create it from nothing?”

Lucifer smiled. “If you follow me, you won’t ever feel the need to ask that question again.”

Tune in on Wednesday for the second part of this chapter!

“The Redeyes“—a story about killer robots, Jesus Christ, and a convict who holds the key to freedom for a group of survivors—is […]

My flash fiction story “The Internet of Annoying Things” was published in Asymmetry Fiction today. Check it out and let me know what […] 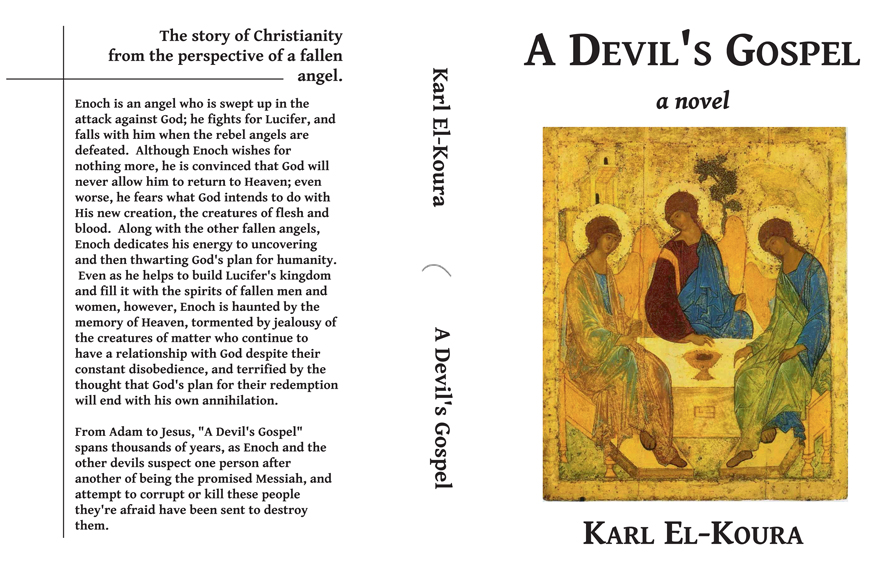 Earlier this week I revealed the ebook and paperback covers for A Devil’s Gospel. Years ago, when the manuscript was ready for […]