↓ Skip to Main Content
Home › Blog › Confused Expressions #9: My Body is My Temple

Confused Expressions #9: My Body is My Temple

When I was younger, a friend said to me—if memory serves, in response to my resolute disinclination to smoke cigarettes with him—”Your body is your temple, isn’t it?”

It was the first time I’d heard the expression, and although I’ve heard it many times since, it seems no less ridiculous (and something much worse) now than it did then.

The expression is ridiculous on several levels: first, if your body is your temple, what exactly are you worshiping in there? None of us are gods, so why should any of us expect to have a temple consecrated to us? Second, if your body is your temple, why should that stop you from polluting that temple to your heart’s content? It’s your temple, after all, and you should do with it as you wish. Third, the expression implies that we have a lot more control over our bodies than we actually do. Can we destroy and rebuild our bodies on a whim? Did any of us have any input on the original design of our bodies—our height? the shape of our face or feet? the colour of our hair or eyes?

But the expression is worse than simply ridiculous—it’s pernicious. Some people do treat their bodies as if it was a shrine to the god called “I”; and because that’s obviously not true (we are not gods, after all), the place of worship becomes the object worshiped; the temple becomes the god. Some people are so focused on their bodies that body-image is all-consuming. This obsession can take different forms with different levels of severity: from eating disorders like bulimia to depriving oneself of tasty food so that eating becomes mere drudgery; from a life-threatening endless series of plastic surgeries to an often looks-threatening (in my own aesthetic judgment) endless series of tattoos; from allowing our fears to goad us into spending large portions of our income in fueling a multi-billion-dollar cosmetics industry to spending so much time at the gym that one has no time or energy for anything or anyone else. When we turn our bodies into gods, they become demanding gods who want all of our attention—just like any other idol would.

But back to the original point: if one’s body is one’s temple, what argument can you use against someone who doesn’t mind a polluted temple? And perhaps even worse: what’s to stop someone from violating the body of another person? That’s their temple, and if they can’t protect it, what argument could keep an aggressor from knocking down the door and taking what they want, or even burning the whole temple to the ground if they so choose?

There is a slight variation to that expression, though, and one that is as profound as the other is ridiculous, and as helpful to our moral goodness as the other is detrimental to it. Our bodies are not our temples, but they were meant to be temples, living temples to the living God. A temple of God—now that’s something worth striving to keep holy and clean and strong. A temple of God—there’s a warning to give pause to anyone who wants to trespass on another human being’s body. As St. Paul put it when writing to correct the young and wayward church in Corinth:

“Don’t you know that you are a temple of God, and that God’s Spirit lives in you? If anyone destroys the temple of God, God will destroy him; for God’s temple is holy, which you are.”

Whatever your religious beliefs, I hope we can all agree that the expression “my body is my temple” is confused at best.

Karl El-Koura was born in Dubai, United Arab Emirates and currently lives with his beautiful editor-wife in Canada’s capital city. More than sixty of his short stories and articles have been published in magazines since 1998, and in 2012 he independently published his debut novel Father John VS the Zombies.

34 comments on “Confused Expressions #9: My Body is My Temple” 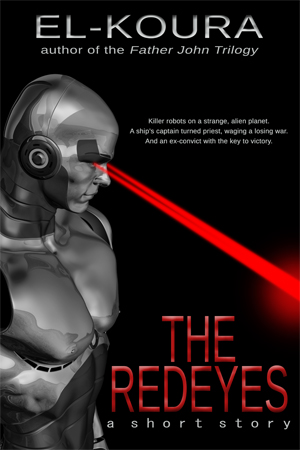 Killer robots on a strange, alien planet.
A ship’s captain turned priest, waging a losing war.
And an ex-convict with the key to victory.