My short story “Journey to Anasta” is now available in Volume 3, Issue 2 (October/November 2021) of Utopia Science Fiction. You can buy the issue if you’d like to read my story and the other content listed below.

Letter from the Editor by Tristan Evarts

Journey to Anasta by Karl El-Koura

The Purple Rose of Retribution by Larry Hodges

The Smilodon by Alzo David-West

A Temporary Utopia by Joyce Frohn

Aboard the space station Invictus, Maria Petrova stood at the back of the main control room, surrounded by some of the highest officials of the Solarian Fleet. She felt desperately out of place among these gray-haired men and women in their space-black uniforms, the coats weighed down by shining arrays of medals. But she’d fought for a command-side view of the mission, and whether because she was the wife of one of the co-pilots about to make history, or because she was one of the fleet’s top pilots herself, she’d been granted membership to this exclusive group.

The large viewscreen at the front of the room, looming above the orchestra pit of analysts and engineers, showed Mercury on the right and the Talarian, the experimental wormdrive ship carrying her husband and his co-pilot Rasha Pion, approaching from the left. As she watched, the flared solar sails folded back around the ship, like a Siamese fighting fish relaxing its fins.

The view switched to the feed from the cockpit as Sander activated his microphone and said, “All systems normal. Dropping into orbit around Mercury.”

At the sound of his voice, their baby fluttered in Maria’s belly. She resisted the urge to place her hand there.

Then, of course, Sander had to add a joke: “Anyone write us something clever to say before we become the first people to travel faster than light?”

A wave of laughter went through the control room.

The mucky-muck standing next to her chuckled, then turned and said, “World’s about to change, isn’t it?”

She nodded but didn’t say anything. Nearly instantaneous travel between the colonies, spread from Mars to the stations orbiting Neptune–would that change things? Yes, she thought, just like the invention of the wheel had changed a few things.

Because of what Sander and Rasha were about to do, the universe would become a lot smaller. One day soon the strawberries that grew on Neptune’s stations could be shipped to Luna City in a few minutes, without having to flash-freeze them. One day humanity might even leave the solar system without also having to be flash-frozen in giant freezer ships and thawed thousands of years later.

“Those brave captains will be time travelers, won’t they?” the admiral asked with another little chuckle. “We’ll be growing older and they’ll skip right ahead into the future. Isn’t that a thing?”

Maria wanted to focus on the screen, to remember every moment leading up to her husband’s historic spaceflight. She didn’t owe this curious person, unconnected to the wormdrive project and granted this access due to his status, but she still couldn’t bring herself to leave him with his misconceptions. “In a way, yes,” she said, “but time dilation isn’t really a factor with this trip. It’s just a few jumps from Mercury to Pluto. The differential depends on the number of jumps, rather than the distance traveled. Two days will pass for us, but not quite a minute for them.”

The admiral whistled. “Mercury to Pluto in not quite a minute!”

On the screen, the Talarian had almost completed charging its wormdrive, leveraging the tiny planet’s gravitational field. In a few moments it would break orbit and enter a hole in the folded-up fabric of spacetime, and Sander and Rasha would be the first human beings ever to travel–

Maria stepped forward, a vague feeling of unease erupting into heart-pounding urgency. Something was wrong. The ship was shaking.

A buzz of activity was sweeping through the pit. Commodore Damac leapt to his feet, demanding updates from each station in quick succession.

“What’s happening?” the admiral asked, but she ignored him, her eyes darting from the commodore to the capcom to the screen.

“Call it,” she whispered. What were they waiting for? Unable to restrain herself, she flew down the stairs, aimed at the commodore like a torpedo. But before she could reach him, he turned to the capcom and nodded.

But on the screen the Talarian disappeared.

Read “Journey to Anasta” by buying your copy of Volume 3, Issue 2 of Utopia Science Fiction. 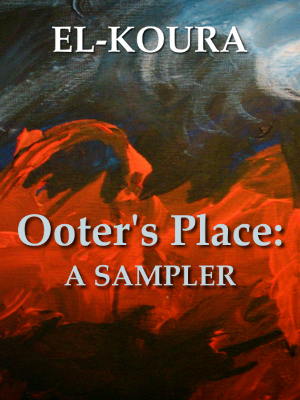 Ooter’s Place: A Sampler is a free ebook availaible for download in a wide range of formats compatible with the Kindle, the […]

I’m late to report this on the blog, but I did a Snoopy happy dance a few weeks back after selling my […]

The Lost Stories: A Series of Cosmic Adventures is being serialized on Wattpad. The introduction from the book is up now; the plan is […]