This past week I read two posts that made me shake my head in disbelief—the infamous Lynn Shepherd piece where she asked J.K. Rowling to stop writing books in the adult market (she graciously allowed Ms. Rowling to keep writing children’s books and books “for [her] personal pleasure”—she would never deny anyone that) so that Ms. Shepherd’s novels would have a better chance of attracting attention, and an anonymous bestselling writer who responded to the claims that publishing books isn’t a zero-sum game: “If you express those ideas as numbers, you’re describing the lower slopes of an exponential curve that has to—can do nothing other than—explode upward until every cent of global GDP is spent on e-books, and every second of every human’s day is spent reading them.”

Sure, Anonymous Bestseller, in theory publishing books is zero-sum: people’s money and time is limited, so, theoretically, more books available to people means more competition, which means less time and money that can be spent on your or my books. (Set aside for the moment that there are already way more books available than any one person can read in a normal lifetime).

In the real world, though, the competition isn’t among writers for readers, the competition is between writers of prose fiction and producers of every other form of entertainment (movies, TV shows, music, computer games, even YouTube cat videos). I adore reading, but I spend a lot more time in any given week watching movies and TV shows and listening to music than I spend reading for pleasure. Why? In part because after a long day or long week at work, I sometimes just want to veg in front of a big screen (while still being social—it’s awkward to invite your friends over on a Friday night to quietly read a good book together). But part of it is also that movies and TV shows are really good these days—my wife and I watched Her in theatres a few weeks ago and loved it; that movie was some of the most satisfying science fiction I’ve encountered over the last year, in film or in print. A few weeks ago, I finished watching Breaking Bad, which is as satisfying a thriller as I’ve encountered in a long time.

We writers are not at war with one another, battling over precious resources, with each writer individually trying to conquer a limited portion of the Land of Readers for themselves. Ours is a war to capture hearts and minds, where collectively we writers are trying to convert non-readers into readers and sometime-readers into frequent readers (and, why not, frequent readers into obsessive readers). Most people spend most of their leisure time doing non-reading activities, and spend most of their entertainment budget on movies and games and music and other non-book things. But every captivating and entertaining novel encourages us to spend more time reading—to seek out more great and entertaining novels rather than click play on the next movie in our Netflix queue or look up what’s playing at the local movie theatre.

There’s no doubt that J.K. Rowling converted a generation of kids into readers, teaching them how wonderful and satisfying reading a novel could be. We need more J.K. Rowlings, and more books by Ms. Rowling herself, to keep up the good fight. If the day ever comes where almost everyone is reading almost every minute of their free time, then we can start worrying about zero-sum in publishing books. Until then, rather than see ourselves desperately fighting over scraps, let’s encourage one another to keep writing, and keep writing great books that can capture people’s hearts and minds, and convert more of them into readers.

Because it seems to me from the types of posts and comments I quoted above that some of us are seeing a tiny tree and wondering how that little tree’s fruits can possibly sustain us all. But behind that tree there are entire forests with more fruit than any one of us can ever harvest in a lifetime—if only we’re clever and engaging and entertaining enough, as a group of prose fiction writers, to conquer those lands. 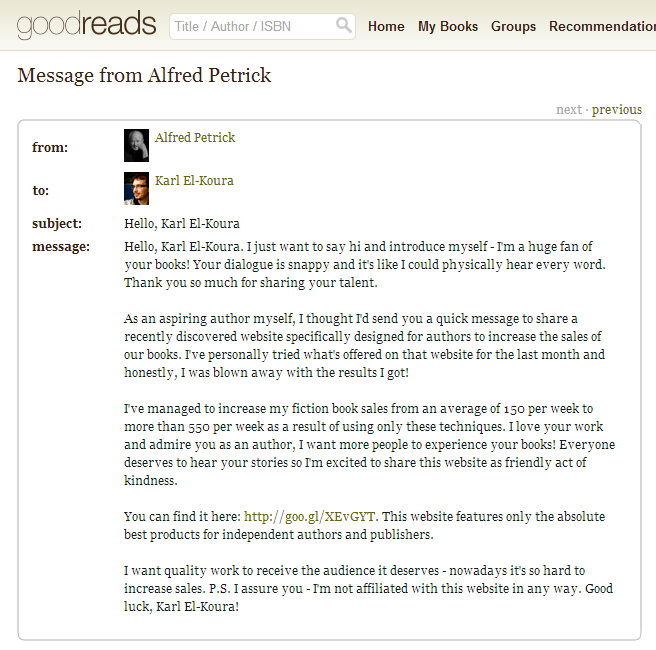 My latest recommendation is one of my favourite novels: The Screwtape Letters by C.S. Lewis, a book that has managed to retain a great […]

First of all, I hope all my neighbors in Ontario and Quebec have safely survived the storm that roared through our provinces […]

4 thoughts on “Is Publishing a Zero-Sum Game? A Response to Lynn Shepherd, an Anonymous Bestseller, and Like-Minded Writers”