C.S. Lewis wrote, received and responded to an incredible amount of letters in his life. The three-volume collection of some of his letters, published by Zondervan, runs to over three thousand pages. Suffice it to say that the man was familiar with the art of letter writing, a talent he put to good use in The Screwtape Letters—which, as the title implies, is a novel written in the epistolary style. (Interestingly, now that the practice of letter writing has all but died out, I wonder if a novel like The Screwtape Letters could be written by a young writer today.) 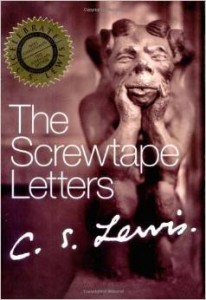 The Screwtape Letters by C.S. Lewis was first published in 1942.

Written in the middle of the Second World War, The Screwtape Letters consists of a series of letters from an experienced devil, Screwtape, to his less experienced nephew, Wormwood, advising him how best to tempt his “patient” into Hell as part of their own spiritual war with the “Enemy.” Part of the fun of the book is in such inversions—Screwtape refers to Satan as “Our Father Below”; speaks of the “high and austere mystery to which we rise in the Miserific Vision”; the more senior demons are “far deeper down in the Lowerarchy.” Another part of the fun is in the underworld Screwtape hints at, with a High Command, a House of Correction for Incompetent Tempters, both a Secret and an Infernal Police, and a Philological Arm charged with playing on our vocabulary, like “substituting the negative unselfishness for the Enemy’s positive Charity.” There are also more direct bits of fun: the manuscript breaks off at one point because “in the heat of composition,” Screwtape has inadvertently allowed himself to turn into a large centipede and has to dictate the rest of the letter to his secretary Toadpipe.

But Lewis has a serious purpose in mind. Through the devilish wartime correspondence, Lewis comments on topics as diverse as prayer, social activism, sex and sexual temptation, the historical Jesus and the “Historical Point of View”, love and marriage, and literature and art. By using the epistolary style, Lewis is able not only to address these issues directly, he can glide over a great amount of narrative time quickly, checking in on the progress of the “patient” at the beginning of every new letter; there is therefore a balance between Screwtape’s abstract philosophizing and narrative tension—a suspense as we watch the unfolding of the practical effects Screwtape’s advice to Wormwood is having on the unnamed human protagonist (not to mention the effects on Wormwood of his ability to use that advice successfully). Moreover, because Lewis puts his moral lessons in inverted form, they avoid the trap of coming across as trite and preachy. Rather, the lessons are profound and often funny.

To take two examples from the book:

The other lessons in the book are as spot-on, and demonstrate as much psychological insight as those two examples. The double-twist at the end of the book—what happens to the patient and what happens between Screwtape and Wormwood—is surprising and wonderful in the first case (and a boxful of lessons in its own right) and, in the second case, hilarious and appropriate.

Though the language and examples are dated in certain parts, The Screwtape Letters has managed to retain a great deal of its freshness and power in the almost seventy-five years since it was first published. It is an important book, a book that reveals a keen insight into human nature on the abstract side and, on the practical side, a book that will force you to reconsider your own assumptions and unquestioned behaviors; but, even more than that, it is a fun and often funny book that manages to sneak in all those abstract lessons and practical benefits in an entertaining package.